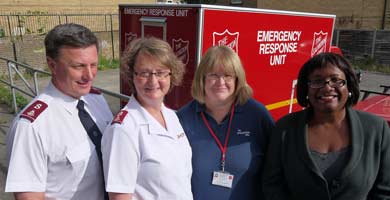 The Clapton Salvation Army corps offers services and activities for every age group in the local community, from parent and toddler groups to a weekly knitting club. The centre also runs a coffee shop and charity shop, which provide cheap food and clothing whilst generating funds for community services.

When Captains Karl and Ruth Gray were appointed as Salvation Army officers to Clapton, eight years ago, the parent and toddler group was the first community service they set up. It has been running ever since.

Today the parent and toddler group is run by Lisa Venables, a local mum who used to take her own toddler to the centre. The group attracts a diverse range of local people and there are three sessions every week in term-time, each one accommodating up to 35 toddlers and their parents for a two-hour session of playing and socialising.

Diane Abbott MP said: “I have been the Member of Parliament for Hackney North and Stoke Newington for 25 years now and I have been a huge admirer, since I was elected back in 1987, of the work The Salvation Army does in communities right across the country but particularly here in Hackney.

"Historically, they have played a huge role in engaging with and serving inner city communities like my own, and they offer their support to anyone who needs it, whatever their background or beliefs. I was delighted to spend the morning with many of my constituents and look forward to my next visit.”

Captain Ruth Gray of the Clapton Salvation Army said: “We are pleased to show Diane Abbott MP around our toddler group. The group is just one of the services we provide to the local community. We find ourselves increasingly supporting people in the local community who would otherwise fall through the gaps in society. We offer practical support, with the limited resources we have, to help people help themselves out of their situation."