Around the world 1.4 billion people live below the poverty line; in the UK this means existing on just £1 a day. The Salvation Army invites you to do something about it by taking the Live Below The Line challenge to spend just £5 over five days on food and drink, from 07-11 May.

To get involved, sign up at www.livebelowtheline.org.uk/ and create your own fundraising page, find tips on how to do the challenge and see how to spread the word to your friends, family and community.

All donations raised will be used by The Salvation Army’s International Development UK (SAID) to support its new FARM programme that helps small farmers to grow enough produce to support themselves and their families.

‘Live Below The Line is a chance to take one small step towards understanding what 1.4 billion people go through each day, and to raise money to help The Salvation Army in our work to help people lift themselves out of such extreme poverty,’ says Carl Jobson from SAID.

‘As well as asking friends and family to sponsor them, we hope people will use their daily experiences of spending just £1 a day on food and drink to bring extreme poverty to the forefront of conversation in homes and workplaces. Together we can also raise our voices on behalf of those who don’t have a platform to speak out.’ 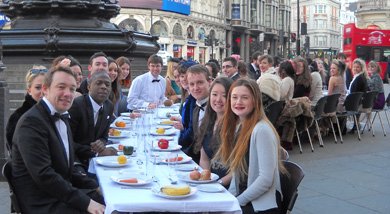 Actress Bonnie Wright helped to launch this year’s Live Below The Line campaign by hosting a dinner party with a difference in Piccadilly Circus. Instead of an affluent al fresco meal, the Harry Potter star and fellow diners were only served a tiny portion of raw vegetables: ‘Poverty is a huge issue affecting so many people around us, and yet it’s often too easily ignored. Live Below the Line is a fantastic project that everyone should get involved in.’

Jo Hann, a teacher from Guernsey, took the challenge in 2011 with her husband, sister-in-law and mother-in-law, raising more than £1,400 for SAID. ‘We had virtually the same meal everyday; high in carbs but low in calories, which meant we were constantly tired but as soon as you tried to go to sleep all you could think about was your empty stomach,’ says Jo. ‘But we found people around us were extremely supportive and encouraging; the more we suffered, the more people gave. It enabled all sorts of opportunities for sharing with friends, colleagues and strangers.’

Jo adds: ‘As a teacher the best part was how my pupils got behind me. We made 800 cakes raising £400, though the smell and the thought of sugar was torture! I definitely want to take part again as that's what 1.4 billion people have to do every day. It's not right, it's not fair and we have to do something about it.’