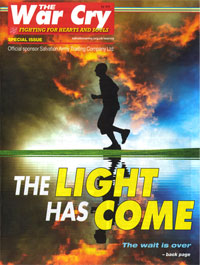 The Salvation Army is celebrating London 2012 with a special edition of its famous weekly newspaper, The War Cry. Free copies will be given to members of the public watching the Torch Relay, the Games and the Paralympics from Saturday (19 May 2012) until September.

The charity and church is also providing refreshments to spectators from its emergency response vehicles along the route and at venues. Plus, Hadleigh Farm, The Salvation Army’s special education needs training centre and working farm, will host the London 2012 Olympic Mountain Bike competition in August.

In the special edition of The War Cry, Olympic rower Debbie Flood and Paralympic wheelchair racer Anne Walufa Strike talk about their Christian faith and hopes for the competition. Reverend Kelvin Woolmer is interviewed about his role providing pastoral care for 20,000 workers during construction of the Olympic Park in east London and for competitors during the championship.

Major Nigel Bovey, Editor of The War Cry, says: ”The special edition is an opportunity to 'hand over' the good news about the difference Jesus makes to life. The War Cry is a weekly paper for everyone: those who think a lot about God and those who don’t give him a second thought.

'With thousands of people lining the streets to see the Olympic flame, this is an ideal opportunity for The Salvation Army to remind people about God's love for he whole world'.

The War Cry, which has been published weekly since 1879, is the UK’s best known Christian publication. It is published in 40 editions and 28 languages across the world and features human-interest stories, Christian comment, social and ethical articles and much more. Costing 20p, the newspaper is sold on high streets, in pubs, outside supermarkets and is also available in churches and prisons.