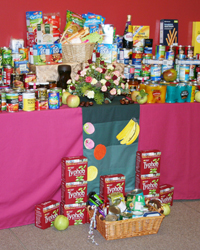 Wrexham Salvation Army has announced a new partnership with The Trussell Trust and local churches to help vulnerable people in the area through Wrexham Foodbank.

The Salvation Army in Wrexham hs been handing out food parcels for many years and has seen marked increases in requests for support. The new Wrexham Foodbank is in response to local churches approaching The Salvation Army to see if there was some way that they could support the work already taking place. The partnership has been supported by Cytun Wrexham (Churches Together) and Mission Wrexham both through funding and volunteers. So far more than 50 people have signed up to become volunteers from a variety of churches in the local area.

The Salvation Army has a long history of offering practical support to people who are vulnerable or in need in every community and the project reinforces the Army’s belief of transforming lives through community work and help support people at their point of need.

Karen Edwards, Community Co-ordinator at The Salvation Army in Wrexham, said: 'We are absolutely delighted with the support we have received for the partnership from local churches and referral agencies. It shows that the people of Wrexham support The Salvation Army and the work that we do. Over the last year requests for food parcels have more than doubled and this agreement will cement relationships that will enable us to help more people with various needs.'

The Trussell Trust, said: 'The Trussell Trust is delighted to be partnering with The Salvation Army, Mission Wrexham and Churches Together to launch Wrexham foodbank. The current economic climate is seeing the need for foodbanks soar nationwide. We are committed to helping communities such as Wrexham launch foodbanks to provide emergency food to people in crisis in their local area. Foodbanks fed 128,687 people nationwide last year and the Wrexham foodbank will undoubtedly provide a lifeline to many.’

Major Michael Highton, divisional leader of The Salvation Army in the North-Western region, said: ‘This is a great day for this initiative and The Salvation Army locally who, on a weekly basis, work in the local community to serve those journeying through difficult times. This partnership means that we have extra support on offer which will help us meet the increasing needs of people in and around Wrexham.

‘It also affords us an opportunity to demonstrate further our belief of changing people’s lives within communities and enhances the already strong ties we have with churches and agencies of the local area.’

Wrexham Foodbank will have its first supermarket collection on Saturday 22 September at Morrison's in Wrexham, to which the public are asked to give generously.